The Abbotsford Police Department strives to be open, honest, visible and accessible to the public.  We are committed to keeping you informed about topics of public interest and how the Department is working to enforce the law and keep our community safe.

Through our Media Relations Officer (MRO), Sgt. Paul Walker, we use our website, traditional media outlets (print, radio, television) and social media accounts (Facebook, Instagram, YouTube and Twitter) to keep you apprised of public safety and security issues in a timely manner. We recognize the integral role the media plays in keeping the public informed, so we use these platforms to provide updates on ongoing investigations, to issue warnings regarding public risk, to request information regarding missing persons, and to ask for the public’s assistance in identifying/locating suspects.

A large part of the MRO's responsibility is to respond to the thousands of media enquiries the Department receives every year. AbbyPD engages actively with the media, and endeavours to accommodate all reasonable and lawful requests. For media enquiries or community concerns, please contact the Public Information Officer by email at [email protected]. 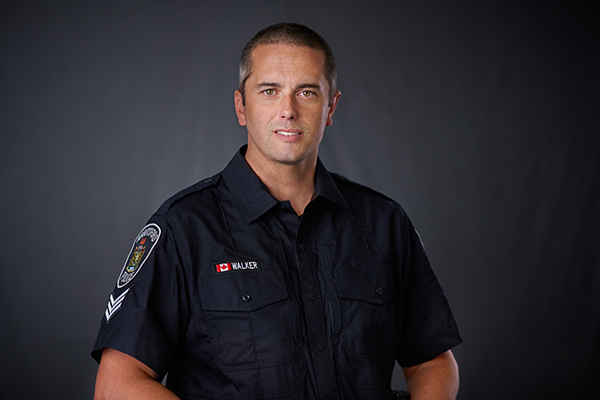 Sergeant Paul Walker joined the Abbotsford Police Department in 2011.  Since then, he has worked in a variety of units including Patrol and the AbbyPD Gang Crime Unit. Between 2016 and 2018, Sergeant Walker was seconded to the RCMP E-Division Integrated Road Safety Unit (IRSU). Sergeant Walker’s leadership in this unit lead to the creation and development of the Lower Mainland Prohibited Driver Enforcement Team.

In 2013, Sergeant Walker began working in AbbyPD’s Public Information Section as the backup media spokesperson. Sergeant Walker enjoys being connected to the Community and has worked along side a variety of Community-led initiatives.

Sergeant Walker has received numerous commendations and awards for his service including a Lieutenant Governor’s award for Meritorious Service, RCMP Commanding Officer’s Commendation, BC Association Chiefs of Police award, and Chief Constable and Inspector Commendations.
Sergeant Walker made Alexa’s Team both in 2016 and 2020 as part of his ongoing commitment to removing impaired drivers from the roadways of British Columbia. 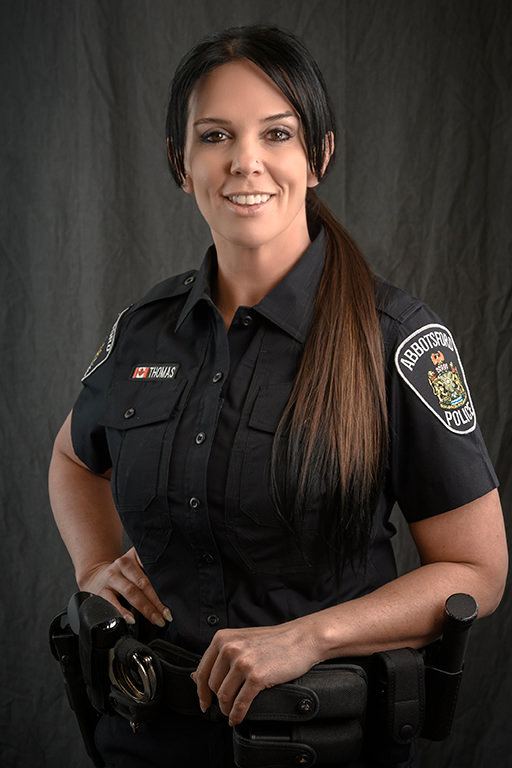 Cst Jody Thomas grew up in Nelson, BC and moved to Abbotsford to start her policing career with the Abbotsford Police Department in 2001. During her career, she has worked in a variety of units that have focused on targeting gangs, prostitution, property crime and drug and firearm trafficking.  Cst Thomas has always been passionate about handling Confidential Informants and after working with the Abbotsford Gang Unit,  she became the department’s coordinator in 2015 for overseeing Confidential Informants. In 2018, Cst Thomas took on the additional role as a back-up media spokesperson.

Cst Thomas has been a member of the Abbotsford Police Colour Guard and has represented the department for two years as a bike rider on the Cops for Cancer Bike tour, personally raising over $25,000 for kids battling cancer. Cst Thomas  has received several awards, including Chief Constable and Inspector Commendations, but her favorite commendations are the drawings and thank you cards over the years from the thoughtful Abbotsford citizens.

In her spare time, Cst Thomas gets teased for always being on the go and appreciating every day. She loves her family and friends and will usually be found on a mountain biking or skiing, dancing to live music, soaking up the sun, flying in the sky or staying fit in the Crossfit gym. Her secret talents are cooking, construction and searching for the funniest goat videos. 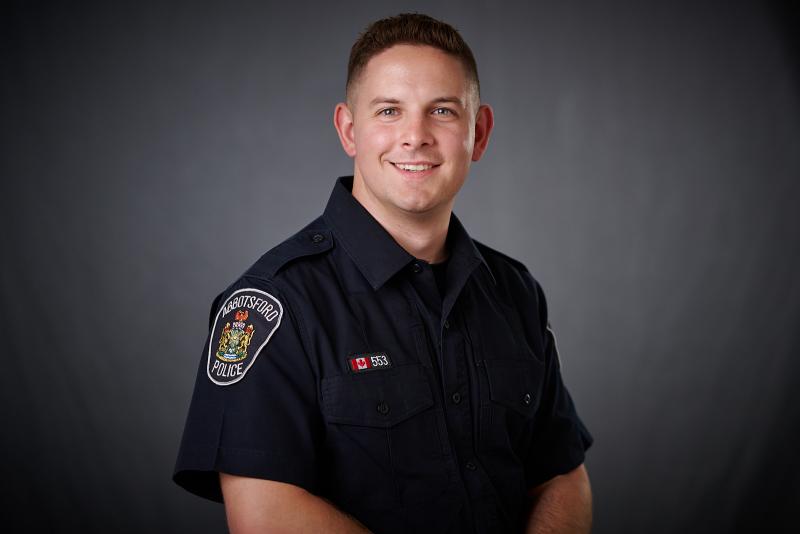 Constable Scott McClure joined the Abbotsford Police Department in 2021. Before joining AbbyPD, Constable McClure was a Police Officer with the Delta Police Department for nearly five years, making the transition after moving to the Fraser Valley with his wife and kids.

Constable McClure holds a Bachelor of Arts Degree with a Major in Criminology from Kwantlen Polytechnic University and a Certificate in Police Leadership & Supervisory Skills from Dalhousie University. Constable McClure is a Drug Recognition Expert and avid impaired driving investigator, having been named as an Alexa’s Team All-Star each year since 2019 for removing impaired drivers from British Columbia’s roadways. Constable McClure has also received a Chief Constable’s Commendation while serving with the Delta Police Department.

In 2022 Constable McClure joined the Media Team as a backup media spokesperson and is currently assigned to the Patrol Section. Constable McClure is also a bagpiper in the Abbotsford Police Department’s Ceremonial Unit. 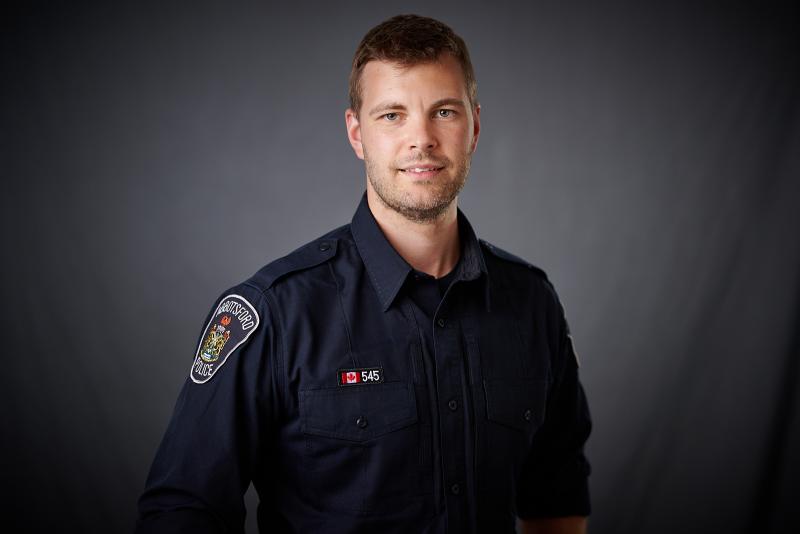 Constable Stele has amassed experience in working in diverse settings and investigating a variety of files during his time on the road. Constable Stele is currently assigned to the AbbyPD Patrol branch, where in addition to responding to calls for service, he also takes on the role of a field trainer for incoming officers from the JIBC. In 2022, Constable Stele joined the AbbyPD media team as a backup media spokesperson. 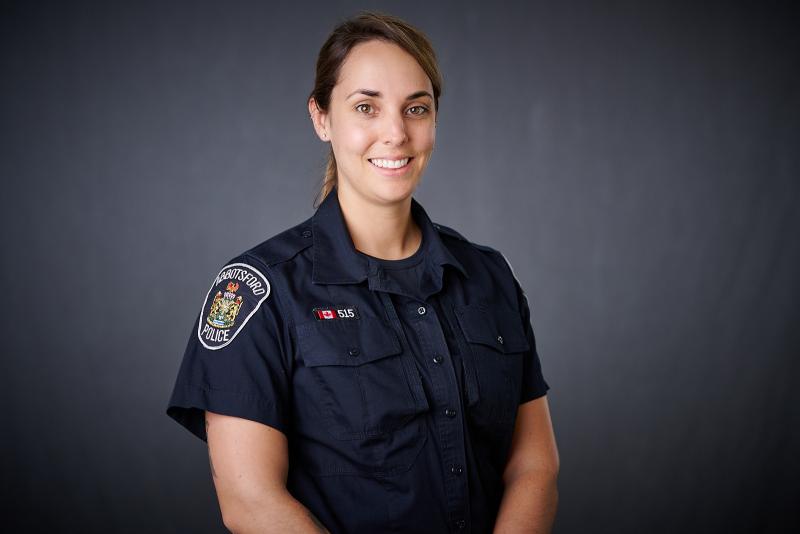 Since 2015, Constable Page has worked in various units, such as Patrol, Domestic Violence Unit, Integrated Border Enforcement Team (IBET) and General Investigation Section. In 2022, Constable Page joined the AbbyPD Media Team as a Media Relief Officer. Constable Page is also an AbbyPD Ceremonial Unit member and enjoys representing the AbbyPD at community events each year. Constable Page is committed to being engaged with the public and has a passion for the career she chose.

Constable Page has been awarded a Chief Constable and Inspector Commendation for achievements within her career.

Constable Page grew up in the Greater Montreal area, where she completed her Police Training in Quebec. Constable Page is fluent in both French and English. 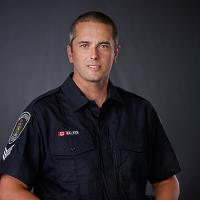 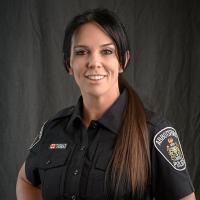 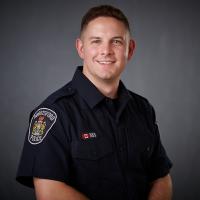 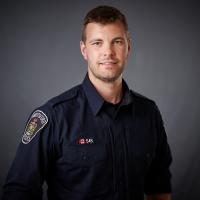